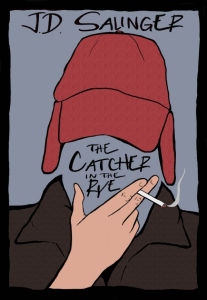 We’d always wanted the best for him, but found him eternally ungrateful but more concerning than that, utterly unhappy and almost always listless. The head teacher of Pencey Prep – the well to do school which we sent him too – had called us just the week before about him getting in with the wrong crowd, and a suspicion of bringing cannabis into the school alongside accusations of smoking alone in the toilet cubicle. My husband went up the wall when I told him about the worrying phone call: he ransacked his son’s room like a cartoon cat trying to catch a mouse. I looked on, frozen at the sight of what seemed like fireworks coming out of his nostrils. The money box was emptied, every CD case opened and the pant draw left like debris from a war scene. My son Holden Caulfield returned home that evening late, unfurnished with any tale of where he’d been since leaving Pencey that day. Dinner hadn’t gone cold because I hadn’t cooked it and here he stood: tie askew, without words and without any resonate form or function to his being. I knew the teenage years to be that of rebellion and often inertia, and to some extent that could be healthy, I know, but Holden was prone to extremes and not a day passed by that my husband and I weren’t left with our hairs stood on end because of that boy! John screamed: “Where the hell have you been boy – come on out with it!?” It was a Friday and DB, our other elder son was coming home from Hollywood tomorrow. Why couldn’t Holden be more like him? We sent them to the same school, we brought them up the same – neither ever went without, and each were shown the same care and affection in their formative years. If ever there was a case for “nature Vs nurture” it was Holden and DB – the two got on sure enough, but it seemed like lifting ten ton trucks just trying to eek words out of Holden, or an industrial crane to pull him to attention! My husband asked the same question again, this time raising his voice: “Where the hell have you been boy?” Our son simply remained slouching, shrugged his shoulders, smirked and replied in a barely detectable mumble: “Why are you so touchy Dad?”